It was a tiring night, and the commute towards home was getting unbearable. Bag-to-bag stacked people were engrossed in their smartphones, when one of them saw ‘ a book has been dropped post’ on the next station. But his competitor saw it too, and in an eye-contact it was decided, ‘yeh wali meri hai. You already have yours in your bag-pack.’ And I didn’t fuss. Why should I have all the fun.

I gave him the head start. We deduced its exact location from BODM’s insta-handle, and as soon as the door opened, he ran like a tracer-bullet. But the competitor inside me, urged me to give it a shot. It was hysterical. Whimsical. And Metro became a playground for the children inside 2 guys, who were running to grab that coveted novel. He followed the deduced location, I chose the opposite one to test my luck. And none of us, found it.

I was sure it was there so I started walking towards him. But to my surprise, while I was mid-way, I saw it in the hands of a metro-staff. I lied to him that it was mine, and he gave it to me. But what followed was the best feeling in the world. Have you ever seen Dale Steyn celebrate in the face of his opponent after taking his wicket? That was me. He chuckled, abused but showing true sportsmanship, clicked my picture with the book. That was his #MisAdventureswithBODM, but that memory is priceless for both of us. 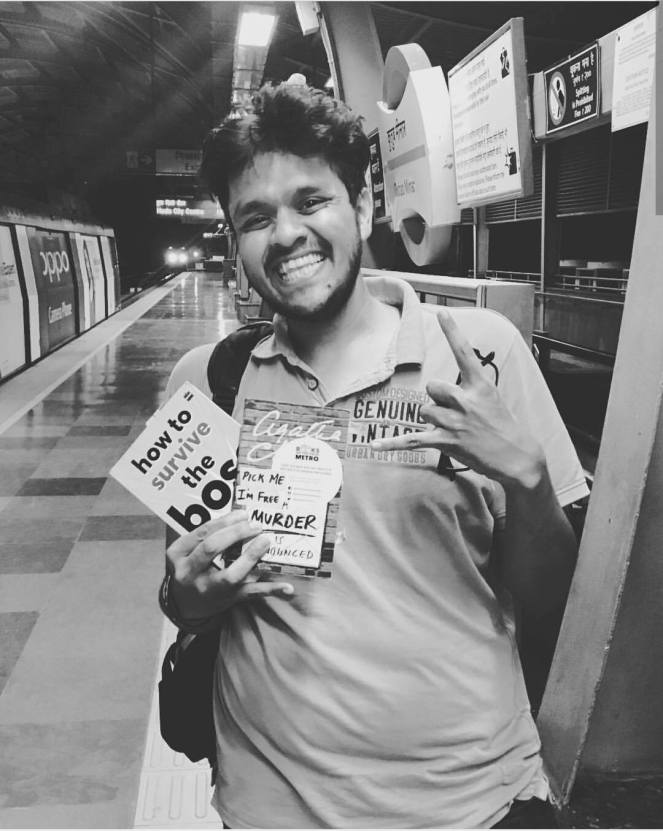 That’s what BODM does for the daily commuters (who love books). As if we all are Ethan Hunt, and a mission is awaiting us on the nearby metro station. I don’t travel that often nowadays, but whenever I do I never miss to check their Instagram story for any new mission.

I would ask all my friends, who love books/adventure, to follow them. And one day, you may have the metro-ride you will cherish forever.

This post is just a token for the priceless memories you guys have given to me. (I also had 2-3 misadventures, but I wanted to share this one to express the wonderful things you are doing for the book-lovers).

P.s: I wrote this to nominate my friend for a give-away contest by Books on the Delhi Metro. It’s the least I could have done for him. And if you know nothing about BODM, do visit their Instagram, facebook page with the same name.

View all posts by ataraxissoul

What do you want to read about?

Translate to your Language